Bicycles May Use Full Lane Signs 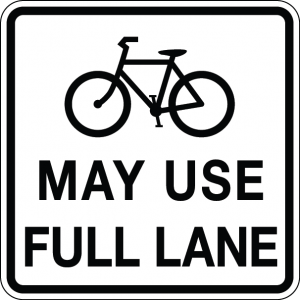 Frank asked:  In Florida, weren’t they SUPPOSED to put out Bicycles May Use Full Lanes signs EVERYWHERE in 2011 that had roads that have “substandard-width” lanes, meaning too narrow for a bicycle and a motor vehicle to safely travel side by side in the same lane?  They actually had that information on TV in 2010!  Whatever happened to that?  I would love to know where I can go to suggest that they actually do that!

The BMUFL signs and Sharrows roadway markings were adopted by the FDOT in January 2011 and as far as I know have been installed in three locations in FL.  I am not aware of an announcement that they would be installed in all locations in which there are substandard-width lanes, which according to FDOT, are less than 14 feet wide (and do not have marked bike lanes.)

Wide outside curb lanes are through lanes which provide a minimum of 14 feet in width.  This width allows most motor vehicles to pass cyclists within the travel lane, which is not possible in more typical 10-12 foot wide travel lanes.

About 95% (My estimate) of roadways without bike lanes in FL have single or outside lanes that are less than 14 feet wide.  Paved shoulders are not part of the roadway in the statutes, and bicyclists may use them but are not required to do so.

(42) Roadway – That portion of a highway improved, designed, or ordinarily used for vehicular travel, exclusive of the berm or shoulder.

Anyone interested in such signs and roadway markings in other locations should contact their local municipality, county or FDOT roadway representatives, or their local county Bicycle/Pedestrians Advisory Committee.

This is an announcement that was made by FDOT regarding Sharrows that were installed on the Bridge of Lions in St. Augustine.  BMUFL signs were also installed.

St. Augustine –The Florida Department of Transportation (FDOT) will be installing a new traffic control feature known as the “Sharrow” or “Shared Lane Pavement Marking” on State Road A1A in St. Augustine on the Bridge of Lions to bring awareness to expect bicycle riders.

Sharrows are used on narrow roadways where a full bike lane will not fit and there is not enough room for a car to pass a bicycle with the required 3-foot passing width. In this case, it is necessary for a bicyclist to “take the lane” and ride in front of motorists, rather than beside them.  Bicyclists who are uncomfortable riding in traffic can still ride on the bridge sidewalk, as long as they yield to pedestrians.

The FDOT, along with the City of St. Augustine and the North Florida Transportation Planning Organization, promotes the use of Sharrows to enhance safe bicycling and to bring awareness of bicyclists’ right to ride in the road.

4 Comments on “Bicycles May Use Full Lane Signs”