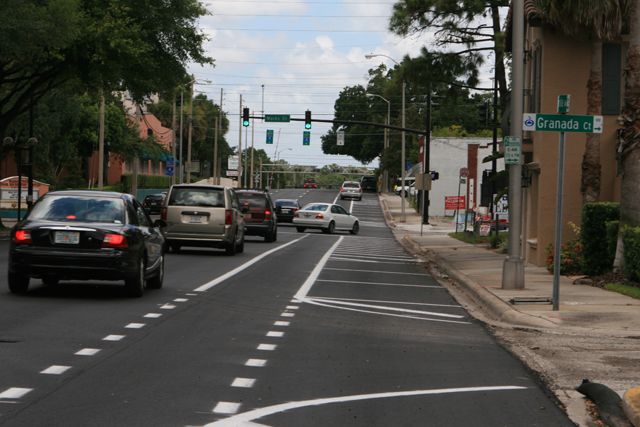 Keri asked:  FDOT recently restriped several blocks of 2 one-way roadways in downtown. Both streets have three lanes and now have bike lanes on the right side. For most of my trips on these streets, my destination must be accessed from the left lane. In accordance with 316.2065(5)(b), I have always just used the left lane for the length of the road, so as not to have to merge across three lanes of traffic. Will HB 971 take away my right to do that?

This situation was present before HB 971.  Now it will be more easily misunderstood, since bike lanes are specifically mentioned in the HB 971.

Actually, I believe the correct description should be “four-lane roadway, one of which is a bike lane.”

(21) Travel Lane: The designated widths of roadway pavement marked to carry through traffic and to separate it from opposing traffic or traffic occupying other traffic lanes. Generally, travel lanes equate to the basic number of lanes for a facility.

(18) Laned Highway – A highway the roadway of which is divided into two or more clearly marked lanes for vehicular traffic.

Subparagraph (b) of the Bicycle Regulations presently states that cyclists can use the left lane of such a roadway.   That is the case now even with the requirement to “keep right” in some circumstances.

(5)(a) Any person operating a bicycle upon a roadway at less than the normal speed of traffic at the time and place and under the conditions then existing shall ride as close as practicable to the right-hand curb or edge of the roadway ….

(b) Any person operating a bicycle upon a one-way highway with two or more marked traffic lanes may ride as near the left-hand curb or edge of such roadway as practicable.

Since the two subparagraphs, (a) and (b), are equally weighted in the statute, it would seem that the use of either to support safe cycling roadway positioning depending on your destination is appropriate.

Before HB 971, it was clear in the statutes that there was no requirement to comply with subparagraph (a), when on a one-way highway with one or more marked travel lanes, and not required to “keep right”.

There doesn’t seem to be any difference with HB 971.  Crossing three lanes of traffic to get to the bike lane, then crossing again at your destination would seem to be less safe and convenient.