1.  The Florida Department of Transportation has stepped in to make a major contribution to the peace and tranquility of roadway users in Palm Beach County.  They have approved signage for the Ride Right/Drive Right Campaign.  The signs will be posted in strategic locations that are being determined now. 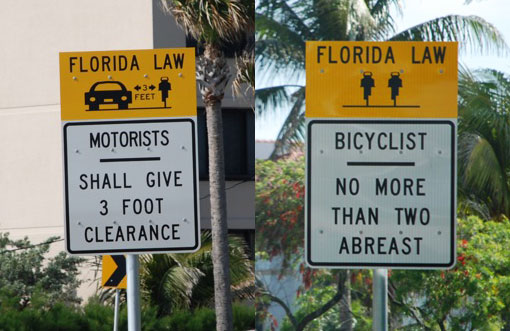 2.  Comcast has provided $200,000 worth of free advertising for PSA’s that zMotion has produced and which are being aired in the region.

There was an incident in Boca Raton, in which a group of cyclists made the press for beating up a car, resulting in one cyclist being arrested, in response to what they considered intentional and dangerous harassment by the motorist.  The charges were dismissed, but there is plenty of blame for all involved and the continuing circumstances that led to the incident.

This isn’t to discuss that incident.  Rather, it may have spawned an opportunity to make some real progress in resolving the long-standing problems of aggressive and illegal behavior of some groups of cyclists, and motorists’ actions that endanger cyclists.

Part of the problem has been that no one with the clout to truly affect the situation has been willing to step up and take control.  That changed as a result of the incident.

Pat Petregnani, the head of Zimmerman Advertising in Ft. Lauderdale, is also head of zMotion, a cycling organization of 600 cyclists, including some of the top racers in the state.  He is willing to take the reins in South Florida and try to effect a behavioral change in cycling, particularly on A1A.

Pat has initiated a campaign called Ride Right/Drive Right, which will include cyclists, law enforcement and the town councils of the affected communities in an effort to publicize and encourage legal and courteous behavior of cyclists and motorists.

Jeff Lynne, an attorney and head of South Florida Bicycle Coalition, has joined with Pat to add his considerable political and legal background to the effort.

Since I am familiar with the problems and with the law enforcement community in the area, I attended meetings with six affected police departments.  The departments are:

The law enforcement community is enthusiastically supporting this serious effort of cyclists to take control and police themselves.  Details are to be worked out, but generally the initiative includes:

All of the departments were aware of the Bicycle Law Enforcement Program, and some have officers on the Officer Advisory Panel.

Our involvement demonstrates the benefit of the Florida Bicycle Association’s continuing role in the Bicycle Law Enforcement Program and contact with the law enforcement community.

FBA has had and will have future opportunities to assist and participate in law enforcement interests around the state as the Bicycle Law Enforcement Program is developed and they more become aware of our pro-active role in supporting them.

The “Ride Right/Drive Right” campaign is local now due to the immediate opportunity created by the incident and Pat’s considerable effort.  When all the details are worked out and the initiative is fully implemented, this may be developed as a model program that can be exported throughout the state as similar problem areas and opportunities are identified.