That’s a great question, and one that is easily misunderstood.  Your question is short, but to adequately answer is lengthy, so please bear with me.  One part of the statute can be taken out of context, and applied literally, without considering the intent of the statute.  The appropriate paragraph is:

(6) Persons riding bicycles upon a roadway may not ride more than two abreast except on paths or parts of roadways set aside for the exclusive use of bicycles.  Persons riding two abreast may not impede traffic when traveling at less than the normal speed of traffic at the time and place and under the conditions then existing.

Good work on your assessment of the first part.  A substandard-width lane, which is too narrow for a bicycle and another vehicle to travel safely side-by-side, a minimum width of 14 feet, is one of the specific exceptions to the “keep right” provisions in s. 316.2065.

A single cyclist impeding traffic in a narrow lane, and many other circumstances, may be entirely legal.   In many situations is also the safest option for cyclists.  “Taking the lane” in substandard-width lanes discourages motor vehicle operators from attempting to pass in an unsafe and illegal manner.  The farther a cyclist is to the right in narrow lanes, the closer and more dangerous the pass by motor vehicles.  Impatient and illegal unsafe passing endangers not only the cyclist, but possibly the overtaking driver and oncoming traffic. 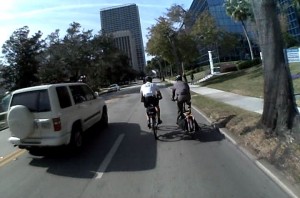 The purpose of the statute is to safely facilitate traffic flow.  If cyclists riding two-abreast are not impeding traffic, they are in compliance with the law.  That can happen in a number of ways.

Note that cyclists in a bike lane may ride two, three, or more abreast.

Obviously, if there is no other traffic, they are not impeding anyone.

If they are on a multi-lane roadway in either a narrow lane or a wide outside lane, and traffic can easily change lanes to pass, they are ok also.  They are not impeding traffic.

Even if the roadway is a single wide lane in each direction, if there is no on-coming traffic, two cyclists riding double are not impeding traffic, since overtaking traffic can easily move to the on-coming lane to pass.

The statute does not clearly state it, but if one cyclist is legally impeding traffic in a narrow lane, and a second cyclist is riding alongside, the two of them are not impeding traffic more than the single cyclist.  They are complying with the intent of the law.

To strictly meet the letter of the law, they would single up and ride one behind the other while taking the lane.

So does it matter if they are riding two-abreast or singled up and taking the lane in that situation?  They are riding safely.  The impact on traffic is the same.  Other drivers must wait until a safe and legal opportunity to pass.

The only situation in which the “impeding traffic” part of this statute is truly violated when cyclists are riding two-abreast is when:

In that case, the cyclists should single up and “keep right”.

Officers should insure they are fully versed in the statute and understand all of the possible combinations above and exercise their discretion to insure that the statutory intent of safe and reasonable traffic flow is fulfilled.

One last point:  Note that the statute says “Persons riding bicycles upon a roadway”.  The paved shoulder is not part of the roadway by statutory definition, so that must be taken into consideration when evaluating this situation.  If one cyclist is on the shoulder and the other is in the roadway, they are not in violation of the above statute.