↓ Skip to Main Content
Home › Ask Geo › What is a Bicycle?

What is a Bicycle?

Charles asked:  My local bike shop owner cautioned me that there was a little known provision that defined human powered vehicles that are legal on the road, having seat heights of at least 25 inches above the ground, which would eliminate most trikes and recumbents.  I’ve done a little research and found the Florida law on bicycles which, happily, seems to contradict what he said.  However, it doesn’t seem to make sense to me.  The way it is worded, it appears to eliminate diamond frames, because most of those have seat heights that exceed 25 inches.  I would appreciate any insights or legal references that clarify the rights of trikers/recumbents.

The definition of “bicycle” in the statutes that you quoted is correct.

(2) Bicycle – Every vehicle propelled solely by human power …. having two tandem wheels, and including any device generally recognized as a bicycle though equipped with two front or two rear wheels.  The term does not include such a vehicle with a seat height of no more than 25 inches from the ground when the seat is adjusted to its highest position ….

The reference to “tandem” is the normal configuration of a bicycle, two wheels, one behind the other.

A vehicle with a seat height of 25 inches or less is not considered a bicycle.  These regulations were written before recumbents and trikes became popular and need to be updated.

The fact that your mode of transportation does not meet the strict definition of “bicycle” does not affect your rights to ride on the roads.  The applicable provision in the statute is:

(1) Every person propelling a vehicle by human power has all of the rights and all of the duties applicable to a driver of any other vehicle under this chapter ….

In other provisions of 316.2065, there is specific reference to “bicycles”, but note the use of the word “vehicle” in this first paragraph.  The rights and duties apply to persons operating a human powered vehicle, and are not limited to bicyclists.  They could as well be applied to persons operating unicycles or four-wheeled human powered vehicles, which seem to be also excluded from the definition of “bicycle”.  A four-wheeled, human powered bus would also fit the definition of “vehicle”.  Here’s one in Amsterdam, where drinking and providing the power is apparently legal.  Note that the driver isn’t drinking. 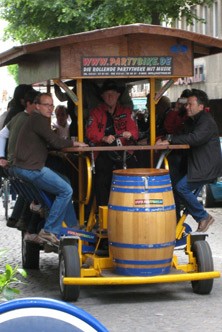 What is a vehicle?

(75) Vehicle – Every device, in, upon, or by which any person or property is or may be transported or drawn upon a highway, excepting devices used exclusively upon stationary rails or tracks.

Bicycles are vehicles, but there are human powered vehicles that are not bicycles.  Operators of those vehicles have the same rights and duties as bicyclists and other drivers.

0 Comments on “What is a Bicycle?”